Kenya is a country full of adventure. From lions and safaris to raging rivers and vast mountains, there is adventure everywhere you look. In the past 12 years, Keith and I have enjoyed a healthy dose of adventure together. Together, we have been to countless states and over 10 countries. We have experienced diverse cuisine and culture, but nothing could have prepared us for the adventure of parenting. In the short 6 weeks since we have become parents, we have experienced a great deal of adventure. However, the adventures of having a baby started many months ago. They started from the day we found out we were expecting and continue still.

The first adventure: We are pregnant! We found out we were expecting while still on our three week sabbatical to the United

States last December. We were able to tell our family and a few close friends before we departed to come back to Kenya. I must admit than when I saw pregnant flash across the screen, my mind instantly flooded with thoughts. The train of thoughts went something like this: I am having a baby. I am having a baby in Kenya. Oh my goodness. I am having a baby in Kenya! We need to find a hospital. What about a doctor? Are there good doctors? The technology is not the best, even in Nairobi. What if something happens? My parents will only see me pregnant through a computer screen. Can I even do this??? But, God was in control. He knew what lied ahead of us and the journey we were on awaiting Cooper’s arrival. The adventure had begun.

The second adventure: Being pregnant in Kenya. The first trimester in Kenya was very hard. It was the hottest time of the year when we returned from our short stay in the United States. Being pregnant and nauseous in 100* heat with no air conditioning is no fun. I remember on Christmas day last year, crying while laying on the couch. I was watching Home Alone and eating Ritz Crackers in the scorching heat. I remember saying “This is not Christmas; this is not Christmas at all.” That was a certainly a hard day. Looking back on it now, I can totally see that God was in control. He allowed for rest and relying in h

is strength during those first few weeks. We rolled out of the first trimester, and I quickly began to feel better. I actually felt really great! We had a busy spring, with a surprise trip to the United States, welcomed the Cox family for two weeks in May, and summer teams began arriving in June. Time was flying. Throughout the summer, Keith and I worked side by side filling prescriptions in the pharmacy each day at the medical camps. The exercise each day a was welcomed treat, even though I was constantly urged to sit down. Apparently when you are pregnant, sitting is important :).  The Lord was so faithful to the work this summer. Over 10,000 people were treated medically, and 2,500 of those came into a relationship with the Lord for the first time. The summer went off without a hitch. I was healthy and the baby was healthy. My husband was also relieved that the baby was not born in the bush. The waiting was almost over! It was hard for me to believe that the months had passed so quickly. I felt so unprepared and prepared at the same time. I remembered in the back of my mind the phrase, “You are never prepared for a baby.”

Then came the third adventure: The journey to Nairobi. We had prayed about whether to deliver in Kisumu or travel to Nairobi. Practically, it was cheaper to stay in Kisumu. However, we felt God leading us to Nairobi. So we began looking for a place to stay. We scoured the internet and also contacted a Christian school/church in Nairobi that we visited in December. We began this search many months in advance, so that we would not need to stress about housing while the summer teams were underway. It was important to be close to the hospital so if my labor began, the drive would not be too far. (For perspective on Nairobi traffic, take Atlanta traffic and multiply it by two or three). However, the hospital that we were delivering at was one of the most expensive areas in the city. We began to pray that God would give us the perfect place and that he would ordain the timing. We waited. There were a few bites but nothing was very promising. We even looked at a few places while in town for an appointment and it nothing surfaced. One month before we were set to head to Nairobi, we again reached out through the Christian school and placed another advertisement in their newsletter. A few days later, a response! The place was near to where we wanted to be and close to our budget. It was self-contained so that we could cook our own food and also have some privacy as well. We jumped on it sight unseen.

When we arrived in Nairobi to the “sight unseen” house. Wow! God blew our expectations out of the water. The place was not fancy but it was perfect for our needs. Its proximity to the hospital was ideal. It also backed up to a national forest and was the most serene place to await our baby boy. It was also cool in the evenings so we were even able to light a fire. We began the wait for the baby. However, we received quite a surprise when we attended our 38 week appointment. We received the news that the doctor wanted Cooper to deliver sooner than originally expected due to restriction in the womb. Needless to say, Keith and I were quite surprised. My mom was even more surprised as she was not set to board a plane until a week later. What were we going to do? We were first time parents only somewhat prepared for labor and delivery? (The picture above was taken right before we departed to the hospital for delivery).

God was in control. He continued to speak this over us. He orchestrated for us to have our own personal labor and delivery nurse from the United States for Cooper’s arrival! A beautiful young nurse had come to serve with CMN for the entire summer this year. It turns out she was a labor and delivery nurse. We feel in love with her from the very first impression. Her name is Erin Cooper. How funny that she shared my first name and our soon to be son’s first name. Over the summer, we had grown very close, and we were sad to say goodbye when we left for Nairobi. After the doctor’s appointment, Keith had a brilliant thought… What if Erin Cooper left Kisumu a few days early and joined us in Nairobi? We called and she agreed to give up her safari and to fly to Nairobi to meet us.

The fourth adventure: Delivery. Being first time parents, we were unsure what to expect in delivery, even more so since we were delivering in Nairobi, Kenya. But lo, how God showed up! My mom made it just in time (she boarded a flight 24 hours after I called her that labor would hopefully begin in just 72 hours) and Erin Cooper was there to coach us through the process. I had wanted to deliver naturally and had planned for this throughout the pregnancy. Keith and I even took childbearing classes together! Now it was possible that I would need assistance in labor. Again, God was teaching me and us that He was in control. The doctor came and broke my water at 8:30 am Kenya time. I asked the doctor to give me some time before trying any medicinal measures for labor. It was not ten minutes after my water broke that contractions began. They began and began strong. A little less than four hours later and we were holding sweet Cooper in our arms. The Lord had not only allowed for a natural delivery but also a fast one! Erin Cooper was an incredible labor and delivery nurse for all of us. We even said that if another Holloway baby comes along, she has to be there for the delivery. She truly was an angel sent by the Lord to not only help the people of Africa this summer but us as well. The picture above was taken as Erin Cooper was departing Kenya to return back to the United States. From left to right: one day old Cooper, Erin Holloway, and Erin Cooper.

The ultimate adventure: Parenting. What a joy it is to be a parent and what a responsibility! Cooper is our greatest adventure so far. We are thrilled to be on this adventure with him and cannot wait to see what is in store. As I read the Bible now, some of the stories have taken on a new light. I think about when Jesus stayed behind in the temple and his parents were frantically searching for him. When they found him, they were exasperated. I see this story in such a new light. I think about Sarah and how long she waited for a son. How her heart longed to be a mother. Motherhood is such a 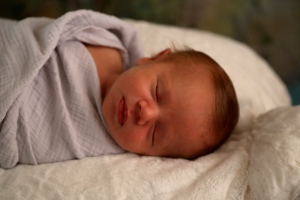 privilege. As Keith and I depart on this adventure, we ask for your prayers. We ask for prayers that the Lord would protect Cooper’s health. There are many illnesses here that he would not be exposed to in the United States. Please continue to pray for our safety. The addition of Cooper had made us even more aware of the need for smart caution. We trust that the Lord will keep us in his arms, but we pray that he place a hedge of protection around us each day. Pray for us as parents. It is a great responsibility to parent a child, especially in the way of the Lord. We want to be found faithful to this task.

“Train up a child in the way he should go, And when he is old he will not depart from it.” Proverbs 22:6