After living in a culture for a long time period, you begin to pick up some of the idiosyncrasies of the language. We now say funny things and use funny words due to our time in Kenya. We use the word funny as opposed to saying silly as it has a derogatory connotation in Kenya.

When we travel back to the United States, we sometimes forget the lack of British influence in American English. When we speak, occasionally people will ask where we are from. When we say Tennessee, they say that we speak funny to be from Tennessee.  Kenya is a former British colony, and still possesses much of the British English from colonization. Not everything mentioned below can be traced back to British English, but we hope this is a fun look at differences in the same language.

Halloween is a popular holiday celebrated in the United States. In Kenya, this holiday only exists within the western community.  It was evident that this is a holiday celebrated nationwide in the United States when you looked at the flurry of pictures on Facebook during October. There were so many adorable outfits and costumes. In Kenya, we have a bit of a different meaning for the word costume. If you ask someone here if they own a costume, they will most likely bring you their swimsuit. A swimsuit here is called a swimming costume or costume for short. Halloween is not a holiday celebrated in Kenya, and there is no cultural reference to a Halloween costume. When we put Cooper in his Halloween costume this year, our staff and a pastor who was visiting at the time, thought it was so funny. What an unusual tradition to dress up a child and send them to get candy from others. Thinking about it as a bit of an outsider now, it is a really unusual tradition!

Cooper in his Halloween costume versus his swim costume

The word “trouser” is a bit of a colloquial or old term in the United States. I rarely used this term when living in the United States. I usually referred to long slacks as pants and not trousers, but the two can be used interchangeably. Here these are two totally different pieces of clothing. Here is a story to illustrate the difference.

One day Keith was speaking with Risper, the adorable Kenyan lady that helps us in our home. He asked if she ever was cold enough to wear slacks. Instead of using the word slacks, he asked “If she wore pants.” The look of horror that came across her face was immediately evident, and Keith had realized what he had asked. He quickly said “I mean trousers.” Mistakenly, when he asked her if she wore pants, he was asking if she wore underwear! Here the word pant is used synonymously with underwear or underpants. Trouser is the word they use to describe long slacks. 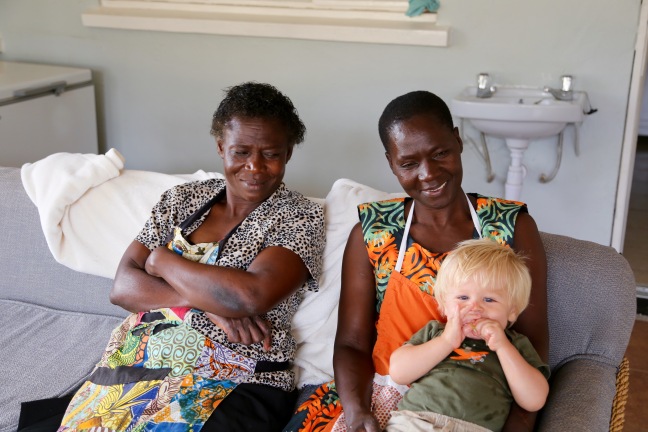 This is a picture of sweet Risper and Rose who help us in our home. Risper is the one on the right whom Keith asked about her pants!

The Lord has graciously allowed us to build a relationship with one of the youth that stays in the slum near our home. He is attending secondary school (high school) right now and is in year one. Part of his responsibility at school is to purchase, wash, and wear a school uniform each day. He has to purchase and order each piece at a store in town. We wanted to help him prepare for his first year, so we went shopping together. We were checking the items off the list, and I mistakenly checked off an item because I thought we had already purchased it. He needed a vest, and we had purchased a traditional V-neck burgundy sweater “vest”.  Check and done. Almost but not quite done because in Kenya, a vest is used to describe a tank top undershirt for men. What an American would call a vest, in Kenya is called a short-sleeved or no-sleeved sweater. He graciously explained the difference to me, and off we went to the supermarket to purchase a package of white tank top undershirts, also known as vests.

There is a considerable amount of public transportation in Kisumu, the city in which we reside. You can easily call a motorbike (motorcycle) to come and get you from your house, and they will take you wherever you need to go. However, we do not use the phrase “come get me,” as it is not commonly used or understood. Instead, you will hear us ask “Can you pick me?” By asking this we mean, can you pick me up, but they discard the up and just use the phrase “pick me.” It probably sounds unusual to some, as if we are asking to be picked in the same way you pull fruit from a tree. Those who have visited us short and long term have been surprised by this phrase.

We come from the southern part of the United States of America. The word biscuit conjures up the smell and texture of a warm, flaky buttermilk biscuit fresh out of the oven, possibly slathered in gravy. If you were to ask for a biscuit in Kenya, however, you would get a hard cookie. Biscuit in British English means cookie. Most of the cookies here are digestives (oat bran based) or tea biscuits (shortbread based). There are no Chips Ahoy to be found in Kenya!

The use of the verb take is also a difference you will find between Kenya/British English and American English. We have been called out several times in the United States and when we are around Americans in Kenya for our use of this verb. In Kenya you do not eat food, rather you take food. We ask friends, “Would you like to take dinner with us tonight?” Funnily, when you are in a restaurant and you would like your food “to go”, you ask “I would like the food packed for take away.” You also take a soda or take tea in a friend’s house. The use of take has a sweet connotation in Kenya. It involves being with people to eat, drink, or spending time together. It is possible while we are in the United States this December, that we will ask you to take a meal with us! 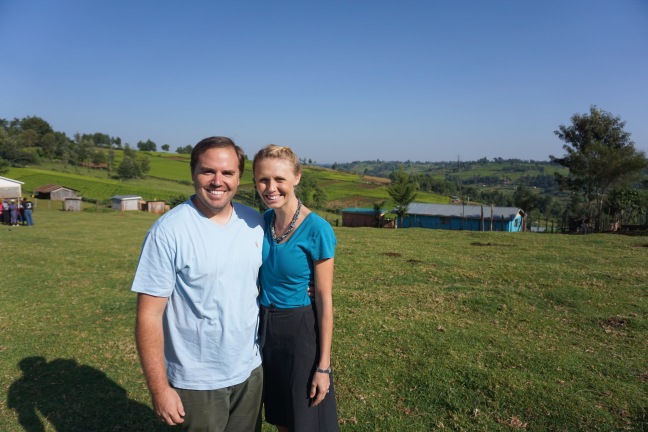 This picture was taken during our summer teams this year in the tea fields of Kenya.

Even in the United States, there are often cultural differences we see between regions. It has been so encouraging to us during our time in Kenya to be involved in a culture that is not our own. Believe me, it has challenges, sometimes daily challenges. But in this, we are pushed to see through others eyes and hear through others ears. We are not only in a Kenyan culture, but we also live amongst Hindus, Muslims, other religions, and those who choose not to believe in religion. At the end of the day, we are called to engage with others and to love. As a child I learned this verse and to this day it has stuck with me.

No matter our culture or where the Lord has us in this world, Kenya or Gallatin, TN – as Christians, we can love well. We are loved by the creator of the universe! We are commanded to love others well as a result of this. Be blessed this week, as we look forward to the thankfulness and love that we have been bestowed with in each of our lives.

Much love from Kenya,
Erin